As one of Ireland’s premier female choirs singing in four parts, Diva Voces has won awards throughout the country most recently in Limerick (first place 2018) in Best Community Choir and Best Gospel Choir categories as well as performing several Irish and World premieres the past several years.

Previous choral/singing experience is desirable but not compulsory.

🎵“Divas sing, are you listening…”🎄 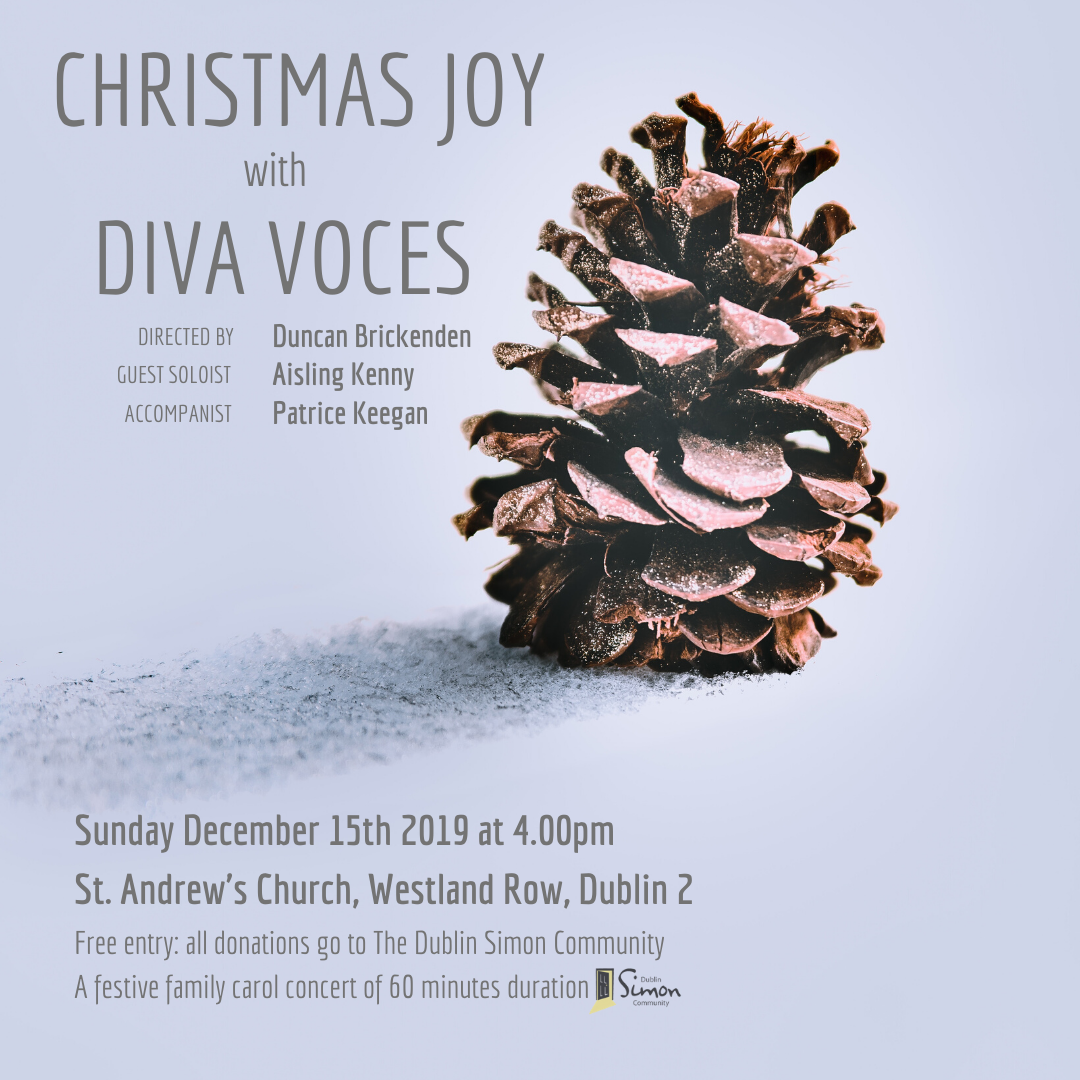 Countdown to our Summer Concert!

Snow Angel is an evocative five-movement choral work that explores themes of love, rebirth, and beauty through the eyes of children and the heavenly army of angels that watch over them, yearning to make a difference to their lives. Quartel weaves a haunting and poignant cello line through the work, and a vibrant part for djembe in movement four, ‘Sweet child’, carries the listener from the ethereal and mystical realm the work predominantly inhabits into an emphatic anthem with a distinctly African feel. The musical language is emotive and pictorial, allowing performers to play an active role in the storytelling.

Diva Voces is honoured to welcome Ailbhe McDonagh as guest cellist with Celine Kelly on piano, conducted by Duncan Brickenden. Tickets are available at the door or through EventBrite. Doors open 4.40pm.

DIVA VOCES is a Dublin-based female voice choir founded in 2006.

Our founder and first musical director was Liz Powell who fostered an ethos of friendliness, fun and mutual support. There was also an emphasis on social engagement and on supporting women artists and musicians whenever possible. We have a commitment to support diversity in the choir; diversity of sexuality, class and of race, of married and single women and of those working within and outside the home.

In 2011 we performed in a concert for International Women’s Day as well as for The Dawn Chorus. In March 2016, we sang at the Waking the Feminists’ second public meeting in Liberty Hall Dublin.  We have also participated in Mental Health Week, since it has been shown that joining a choir is one of the best ways to recover in times of adversity, to raise spirits and to increase well-being.

In 2012, Liz handed the baton to Ruaidhrí Ó Dálaigh. Under his musical direction, the choir expanded greatly in numbers, diversity of repertoire and continued our tradition of doing a Christmas and a Spring concert. We also performed a piece composed for the choir by one of our members, Marianne Lee and were commissioned to record a piece of sacred music written by a sister of the La Retraite religious order.

In Autumn 2017, Duncan Brickenden took over as musical director. We are now almost 60 women strong, and still cherishing our tradition of increasing musicianship while having great fun.

During Duncan’s first term as director, we held both a Winter and a Christmas Carol Concert and we plan a series of concerts and a competition for 2018. In keeping with our policy of supporting women artists, we have commissioned a piece from Georgia Johnson, based on the poetry of the renowned poet Paula Meehan, which we will be performing during our Spring Concert in 2018.